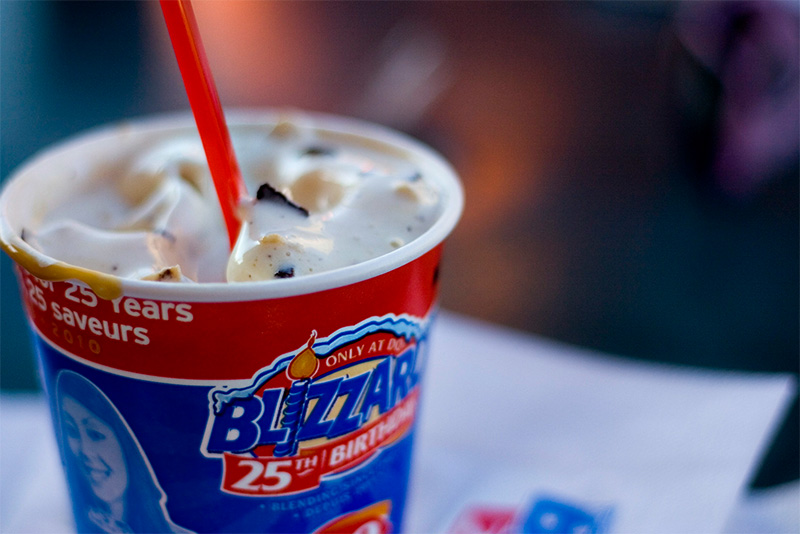 Dairy Queen was founded by John Fremont McCullough in 1940. But it wasn’t until 1985 that the famous Blizzard was born, and it’s been a fan favorite ever since. Here are some fun facts about the blizzard you probably never knew!

1. A franchise owner invented the Blizzard in 1985

The iconic treat, made with soft serve and topping blended together, was first introduced to the public in 1985. Invented by Samuel Temperato, one of the most successful franchisees who owned 67 Dairy Queen franchises at the time the blizzard was born. It quickly became one of Dairy Queen’s most popular products. The year it debuted, DQ sold more than 175 million Blizzards!

2. The idea was “borrowed” from a local custard stand

Samuel Temperato, the creator of the Blizzard, admitted to borrowing the idea from two different St. Louis custard stands in the mid 1980’s. While both the thickness of the Blizzard and the candy pieces weren’t completely original ideas, Mr. Temperato and Dairy Queen brought this type of product mainstream with the “inspired” invention of the Blizzard in 1985. Let’s just be thankful for that.

3. Serving it upside down was also borrowed

It turns out that the Blizzard’s memorable presentation technique wasn’t entirely original either. Temperato also borrowed the idea of serving it “upside down with the spoon handle sticking out”, from the Ted Drewes local custard shop. He thought it was an excellent way to show the quality and thickness of the product.

Blizzards are indeed creamy, cold, and delicious, but they aren’t technically considered “ice cream” according to the FDA. In the US, for a frozen dessert to be considered ice cream, it must contain at least 10 percent butterfat. But Blizzards do not, they are only 5 percent butterfat. This is also true for the DQ soft serve. Hence the reason they are advertised as a “treat”.

5. Oreo originally thought it was a “crazy” idea

Oreo Blizzard’s quickly became one of the best selling flavors in the U.S. after its debut. But initially the owners of Oreo thought it was a crazy idea and were very hesitant, so for a short time Dairy Queen went with another company who was willing to provide the cookie pieces for the Blizzard. Oreo quickly changed their minds as soon as they saw the immense popularity of the Blizzard. Can you imagine a life without the amazingly yummy Oreo Blizzard?

So there you have it – way before the Dairy Queen survey debuted (dqfanfeedback.com), and around 45 years after the first Dairy Queen opened, the famous Blizzard was born. Whether you’re a long-time fan or just discovering these delicious treats, there’s something for everyone at Dairy Queen. Enjoy!